The digital oral presentation (DOP055), Luminal application of a GATA3-specific DNAzyme ameliorates mucosal inflammation in a randomised trial with active ulcerative colitis patients, was given on February 16, 2018 (5:20 PM CET) by Professor Atreya who is heading the Clinical Center for Inflammatory Bowel Diseases and the working group for Patient-Oriented Research and Innovative Therapeutic Strategies in IBD, which is part of the team of Prof. Markus F. Neurath, the principal investigator.

SB012 is an enema formulation of hgd40, a novel DNAzyme that specifically binds and inactivates GATA-3 mRNA and subsequent GATA-3 protein expression. The Phase 2a SECURE study was a prospective, multi-center, randomized, double-blind placebo-controlled trial evaluating SB012 in patients with moderate to severe ulcerative colitis. Twenty patients were randomized to receive topically applied SB012 enema (N=13) or placebo (N=7) once daily for 28 days. The primary efficacy variable was the change in disease activity (Mayo Score) after 28 days of treatment. Endpoints were also assessed at day 56.

Christian Pangratz, CEO and Managing Director of sterna, said: "The data from this Phase 2a trial provide clinical proof of concept that blocking transcription factor GATA-3, which is overexpressed in the mucosa of ulcerative colitis patients, could offer a new approach to tackling this difficult disease. These encouraging results, together with the efficacy already demonstrated in previous clinical studies with different topical formulations of hgd40 in asthma and COPD, are a strong validation of the GATA-3 pathway for the treatment of a variety of chronic inflammatory diseases. We look forward to the continued development of our programs to improve the lives of patients suffering from those conditions."

Clinical remission, clinical response, mucosal healing rates and endoscopic response at Days 28 and 56 were also assessed in the trial. Key findings are outlined below. 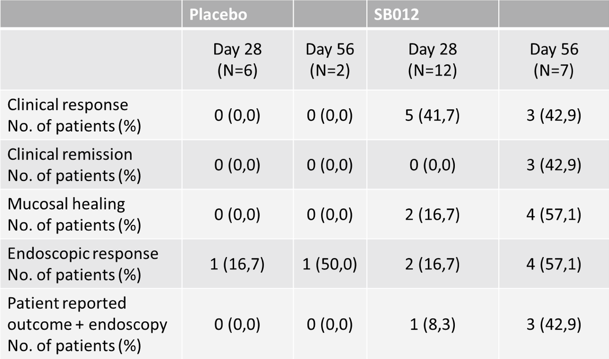 ABOUT ULCERATIVE COLITIS
Ulcerative colitis is characterized by a continuous mucosal inflammation which predominantly affects the large intestine. Clinical symptoms include persistent diarrhea with severe fecal urgency and often incontinence, rectal bleeding, abdominal cramping, weight loss, and general malaise. It is estimated that the disease affects approximately 2 million people in the US, Europe, and Japan.

ABOUT SB012
Sterna biologicals' SB012 is an enema formulation of the DNAzyme-based GATA-3 antagonist hgd40 in development for the treatment of ulcerative colitis. GATA-3 is the master transcription factor regulating Th2-driven inflammatory diseases such as ulcerative colitis, atopic dermatitis, eCOPD and asthma. By inhibiting GATA-3, the expression of downstream cytokines, interleukin IL-4, IL-5, and IL-13, which cause inflammation, is down regulated. In pre-clinical and clinical development, hgd40 was found to be safe and well tolerated with first signs of efficacy. DNAzymes are single-stranded DNA molecules comprising a central catalytic domain flanked by two binding domains. The binding domains attach to a specific sequence of targeted mRNA, such as GATA-3 mRNA in case of hgd40. After binding to the target, the catalytic domain then cleaves the mRNA, thereby inhibiting relevant downstream cytokine expression.